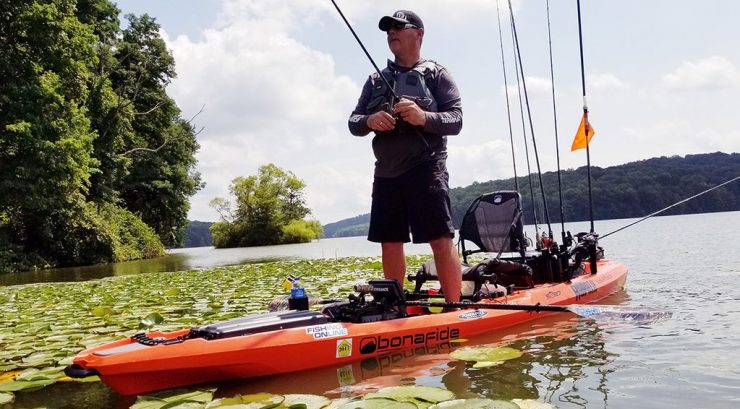 Fishing kayaks come in many different styles and sizes. Ask any kayak fisherman what type of kayak he prefers and you will get a different answer every time. Choosing the best fishing kayak for you means really knowing your own preferences. Some people, usually beginners to the sport, prefer to buy rigged kayaks that are already set up for fishing. Other people like to buy a standard stock model kayak and rig it themselves so they can set it up exactly the way they want.

How to Choose the Best Fishing Kayak

In order to choose a kayak, you should consider where you are going to use it for fishing the most. If you’re going to be using it in salt water instead of fresh water or in water that has a strong current instead of flat water those factors will make a difference in what type of kayak will work best for you. You will also need to choose between a kayak where you sit on top of the boat and a kayak where you sit inside the boat. Some kayak fishermen prefer to sit on top because that makes it easier to get out and wade. But if you don’t plan on getting out to fish then a sit-inside kayak might be a better fit for you because they have a lower center of gravity. The lower center of gravity will make the boat more stable.

There’s a lot of information to process when you’re buying a fishing kayak. Here are some reviews of top fishing kayaks to help you choose. Some common questions to answer are below which will help you with the initial decision-making process.

Do you prefer a sit-in kayak or a sit on top kayak?

The sit-in kayak has been around since the beginning and for that reason is a very popular go-to kayak. These kayaks limit your mobility while sitting inside and you forego storage space on most of these. The sit-on-top kayaks tend to be more agile and you can move around much easier without your legs being restricted to the inside of the kayak. There is room inside for storage and you can move around while casting and retrieving much easier.

What type of water will you be using the kayak in mostly?

Some kayaks are designed for stability and some are designed for maneuverability and speed. Wider, flatter kayaks will be more stable but you’ll lack speed due to their design. Other kayaks are narrow and have fine contours that are designed for agility and speed. These are for more experienced kayakers who plan to be encountering rough water or fast, roiling currents. If you plan on fishing calm ponds and lakes, you will likely want a more stable kayak so you can move around without tipping. If it’s a wider kayak, you may even be able to stand and fish.

Of course, there is a wide range of both kayaks from high end to low-end beginner kayaks.

These kayaks will have few amenities such as waterproof storage compartments and rail guides. The seats are not designed for long-term kayak trips and are not as comfortable as the high-end models. The construction of the kayak will likely be a hollow hull design which can make it a little tougher to steer in a straight line.

Once you get in this range your options open up greatly. Common amenities include ample storage, a solidly constructed hull, rail guides, superior seat design and more. These kayaks are designed with the avid kayaker in mind so you will notice a difference if you are an experienced paddler.

If you plant on using your kayak on a regular basis it’s probably worth spending the extra money for one that will grow with you. If it’s going to sit in the garage most of the year, the cheaper kayaks will be just fine.

The Perception Sport kayak is a fabulous choice for people who are new to the sport. It is a sit-on-top kayak that has an extra wide cockpit to accommodate gear. It is easy to carry and to maneuver even in smaller waterways. You can add a rudder kit to the kayak if you want but it works just as well without one. The perception pescador 12 can go anywhere and handles fresh and salt water, rivers, lakes and bad weather like a champ. Fans of this angling fishing kayak range from beginners who like the price and the ease of use to seasoned veterans who like having a great all-purpose fishing kayak that they can depend on. This is one of the most recommended kayaks for new kayak fishermen.

Some things that buyers should be aware of is that the kayak doesn’t come with a seat so you might want to purchase an additional comfy seat if you’re going to spend hours in the kayak. Also, the weight limit for the kayak is 350 pounds, but some users who are over 200 pounds and carry 30-50 pounds of gear report that the kayak takes on about an inch of water. If you are going to be carrying a lot of gear or if you are a larger user keep in mind that even though the published weight limit is 350 the kayak functions best with no more than about 250 pounds on board. The kayak also doesn’t come with a paddle so you will need to purchase a paddle to use with it.

The Riot Escape 12 Angler Fishin Kayak is a good kayak for the price but it is better for more experienced kayakers. It is a sit-on-top kayak that is pretty stable. It comes with a built-in rudder system that a lot of people find very useful although several anglers have pointed out that the kayak has trouble tracking straight even with the rudder. The adjustable foot pedals also help with stability and steering. This fishing kayak is great for still water and shallow water fishing. It can hold up to more demanding conditions and tougher water but a beginner might have a hard time getting it to perform well in anything but calm or shallow conditions. It comes with five-rod holders and a built-in cupholder which a lot of people really like. The kayak is 12 feet long which gives it great stability but the weight limit is just 300 pounds. Larger fisherman or fisherman who carries a lot of gear might want to consider a kayak with a higher weight limit or carry less gear.

The biggest complaint that fishermen seem to have about the Riot Escape 12 is the hatch in the center which only has to pull straps to open it. It is not totally watertight and many people are unhappy with this feature. It also is not unusual for the kayak to arrive missing bolts or with broken plastic pieces. Check yours carefully when it arrives. Riot is pretty good about replacing any missing or damaged parts though.

The Old Town Dirigo 106 is a small fishing kayak that is just over 10 feet long. The smaller size gives it really great maneuverability but the tradeoff is that it is not quite as stable as some of the 12 footers. If you are an advanced beginner or beyond you shouldn’t have a problem with this kayak. It’s a sit-in kayak as opposed to a sit-on-top kayak but some people prefer the extra stability that comes with a sit-in kayak model. It has a very handy dry hatch built in to hold things like cell phones, keys, cameras, or other things that you really don’t want to get wet. The steering is great and it can turn well and get into very small or tight spaces easily. It has several built-in rod holders that make it easy to fish. The seat is fairly comfortable although if you are going out on the water for several hours or more you will probably want to get a seat cushion to provide a little extra comfort.

The most common complaint about the Dirigo 106 is the foot pads. They are made so that you rest the ball of your foot on the pad which doesn’t provide a lot of support. A lot of users, especially users who are 6 feet tall or taller, find that after a while those foot pads can become uncomfortable. They are adjustable though so you can move them around to find a position that works the best for your height. 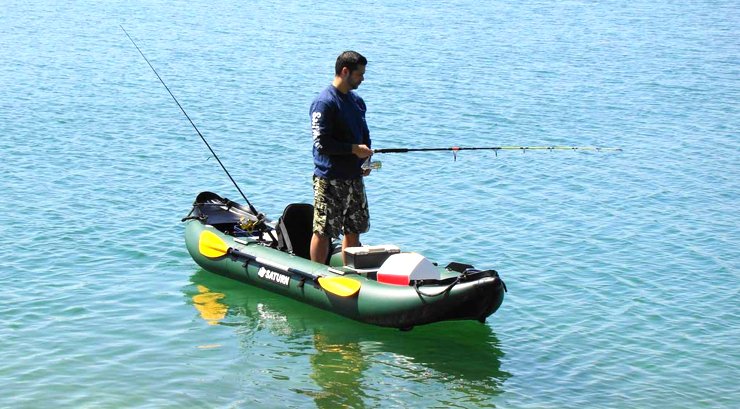 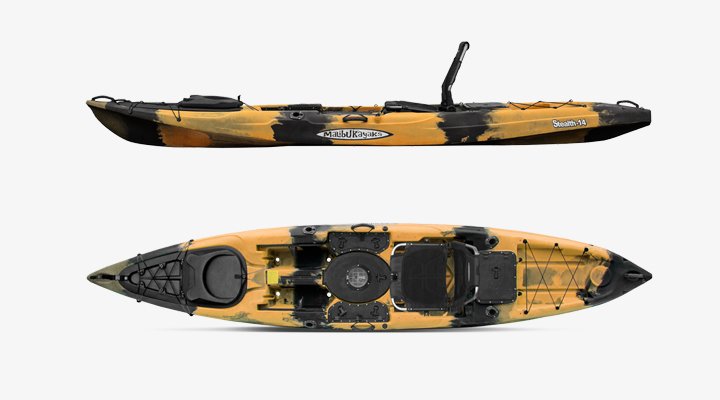 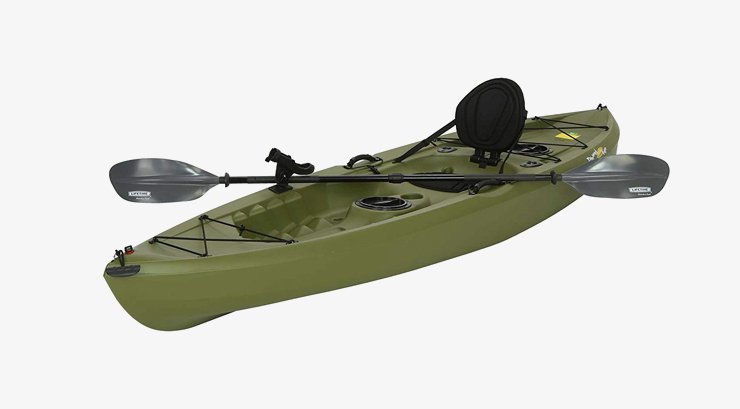 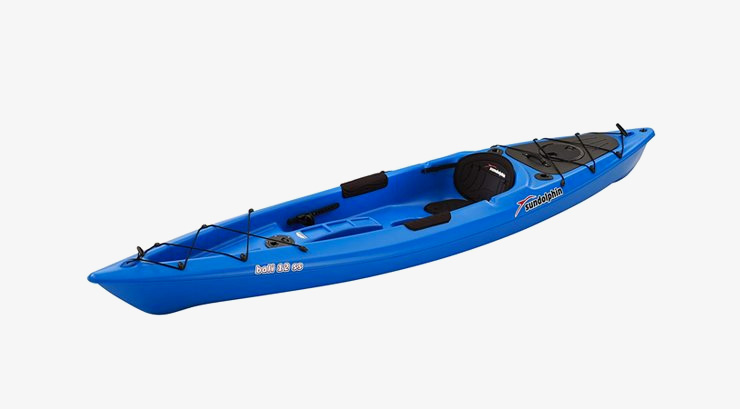 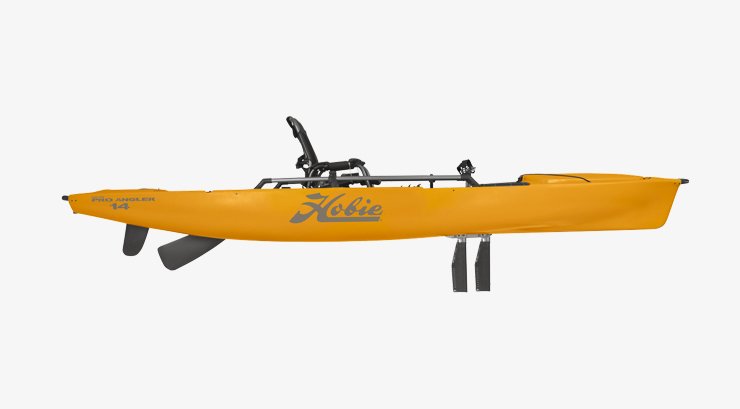 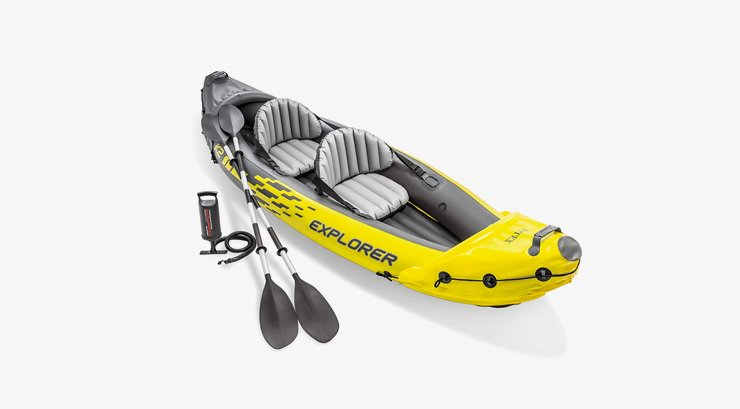