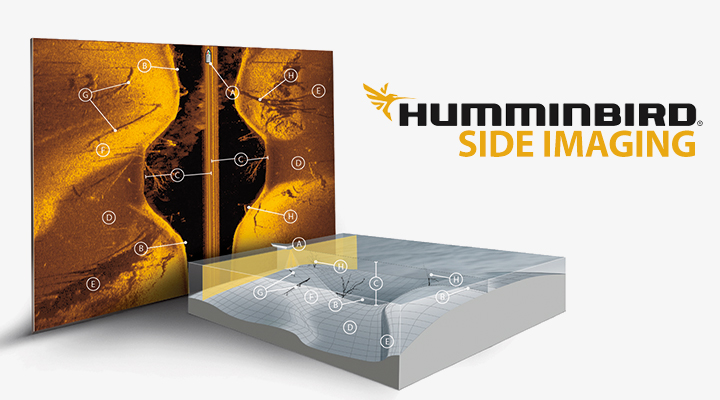 Let’s examine the expensive and, judging by the configuration, top-rated models of the fishfinders on the market. What does allow us to take a good look at the objects under the water with incredible detailing up to now?

At the moment there are 4 models – 798ci SI Combo, 898c SI Combo, 998c SI Combo, and 1198c SI Combo. The index SI is a built-in Side Imaging technology. The index Combo means that the complement of the fishfinder consists of the navy GPS-receiver in the all-weather body, i.e. a valid chart plotter. By the way, Humminbird is the only producer of the fishfinders with the Side Imaging technology available for you and us. The other producers turn out the fishfinders with the similar function only for the industrial application and they are ten times as expensive.

For the visualization, let’s tabulate the specification.

Side Imaging (SI) may be translated in different ways, but the essence of such side imaging is in the narrow beam, which slice the underwater space on the high frequency.

The image generation may be compared with the childish trick, when they put the relief object, for example, a coin, under the sheet of paper. There remains one thing to do – to draw with the pencil on the paper and a mysterious drawing begins to appear.

TECHNOLOGY OF THE SIDE IMAGING: HOW IT WORKS

The side imaging sensor SI uses two very thin sonar beams, directed in the both sides of the boat. These beams gives “the thin section” of the bottom contour, structures and fish, and display the results in form of  “pictures” of the high resolution on the screen of the echo sounder. The marginal beams radiate in different sides by 73 meters from each side, and they are limited by the depth of 30 meters for 798cxi and 46 meters for 898cx, 998cx and 1198cx  (the central beam of all models functions up to 450 meters). Pic. 1.

The main advantage of such technology of the side imaging consists in the fact that it gives the overall review of the large water segment. It will allow us to understand better the topography of the bottom and the disposition of the drowned objects for the more efficient prospecting or fishing. Those, who fish in the salt water, could see the exact details of such widespread bottom structures as wreckages of the ships, reefs, elevations of the surface and drowned rubbish, and also, they will be able to localize the shoals of the small fish in the open space. The fishermen on the fresh water could examine such structures, attracting the fish, as drowned tree trunks and stubs, rocks and the courses of the streams.

SIDE IMAGING: IDENTIFICATION OF THE OBJECTS UNDER THE WATER

The following pictures of the side imaging show, how the echo sounder with the technology Side Imaging “sees” the underwater objects.

The airplane «Cessna» lifted from the water and the image of the moment when it was found out by the echo sounder on the bottom of the water body.

From this picture you can see sailing yacht and a small shoal of fish on the right. The detailing of the image of the object is impressive.

Here we can see, how the salvors lift the car found out by the echo sounder, that the divers couldn’t find because of a very turbid water.

Because of the swash there is a lot of sandy slurry in the water.

There are some nuances while the usage of the function of the side imaging. And it’s desirable to know about them. That’s why, below you’ll find the main advice for use:

In terms of the premises we can say, that the reflection of the objects under the water is very accurate. For example, the fish is reflected in the real size, what is impossible for the echo sounders which function on the base of the technology, which has already become the classical one. Touching the underwater objects and the bottom topography, we can see here indeed a fabulous veracity.

The fishfinders with the technology of the side imaging SI (Side Imaging) hasn’t equal in the search of the drowned objects such as various drowned ships, snags, different engineering structures.

So, we can make a conclusion that these models of the fishfinders will be the perfect searching instrument in the hands of the fishermen, adventurers and other inquisitive minds.

The frequently asked questions about the Humminbird Side Imaging ® technology

1. How can I view the video of the Humminbird Side Imaging file on the computer?
We advise to use the HumViewer programme http://humviewer.cm-johansen.dk/. This free programme allows easily view and analyze the reordered video files.

3. Is it obligatory that the boat moves for the reflection of the Side Imaging?
Yes, it is. In order to get a good image, the boat has to move.

5. Can I mark on the map the object found out by the echo sounder under the water, when I see it?
Yes, you can mark the point on the fish finder with the Side Imaging technology, having driven the cursor on the screen to the place you want. It will become visible on the map.

6. Can I stop the Side Imaging screen when I see an interesting object on it, in order to examine it more in detail?
Yes, you can. The cursor update on the screen may be stopped and you can examine the object by the instrumentality of the instruments zoom (+,-) and to save an object.

8. Can I use an ordinary menu of the fish finder on the screen, while the usage of the Side Imaging?
Yes, you can. The Side Imaging function leaves a very little invisible zone (about 5 degrees) under the boat. The ordinate sonar covers completely this zone.

10. Does Side Imaging function on the big depth?
Yes, it does. It works on the depth up to 45 meters. Meanwhile the distance may achieve up to 75 meters from the sides of the boat.

12. Is it possible to glue the Side Imaging sensor on the bottom of the boat?
No, the sensor can’t be glued on the internal side of the boat. The sensor has the certain working direction, that’s why all the sensor must be dipt into the water for the correct functioning.

13. What is the recommended speed for the Side Imaging device?
The normal operation of the SI is assured by the speed up the 10 miles per hour (up to 18,5 km/h.). Although the sensors, used by Humminbird, allow operating when the speed is fair, but the turbulence behind the boat begins to distort too much. The maximum speed depends on the placement location of the sensor and the form of the boat.

14. Is there an ideal place for the location of the SideImaging sensor?
The best placement location of the sensor depends completely on the type of the boat. The detailed installation instructions are given in the fish finder manual.

15. Are there any difficulties while using the Humminbird Side Imaging?
There aren’t such difficulties. One of the main principles of the Hummingbird Fish Finder is the simplicity of the usage. In addition, the fish finders Side Imaging have intuitively understandable interface.

16. How do the Side Imaging screens function in clear weather, in the sun?
The displays of the Side Imaging fish finders are the embodiment of the advanced manufacturing sciences. They assure the perfect print of the information when there is a bright sunlight.

18. Does the Side Imaging technology allow seeing the fish floating separately?
Yes, it does. The device may identify a detached fish and a shoal of the fish.